Feb 3
Ramblings on my ultra family

Sam
Hi-ho! I am Sam. Sam I am. Sadly, I have not tried green eggs and ham. Welcome to 2017! I'm still figuring out what my racing year will look like but of course, as much trail as possible. I've been a runner for over 20 years - ever since 6th grade Cross Country!

The ultra running family is an amazing group of people. We just lost an incredible member of our family in Aaron Buffington this morning. I didn't know him super well but I felt like I did and I'm taking the news hard. He was part of the ultra family and something in that just bonds you together. A friend of his started a fundraising page for him, as he had been fighting cancer for over a year and you can imagine the medical bills can't be cheap. We smashed past the original goal in the first day. A week later, it's sailed past $10,000. Because trail runners are amazing, caring people. The last time I saw Aaron was at Sawtooth. His brother was running the 50 mile Saturday morning but Aaron was at the start of the 100 mile Friday morning and I saw him in the middle of the night sometime at Crosby-Manitou. He'd been feeling more tired lately but here he was, in the middle of the night, in the middle of nowhere because his ultra family was here and he wanted to see them and cheer them on. I wouldn't have even seen him had my runner not decided he didn't need me to pace right away. We had a lovely chat and I left feeling like he was going to be okay. I sent him a card just last week and he responded with such a nice, selfless message back.

When I was interviewed for a "one year past the Boston bombing" article, the guy from the paper talked about how he heard from other runners that there had been this sense of increased belonging and togetherness in the time since. He was asking if I noticed and felt the same way. I didn't have a good answer for him and there wasn't a good way to express it at the time without sounding like a jerk (and I'm not sure it's coming out right now, either) but this belonging, this togetherness, that's just how it always is with my ultra family. And it doesn't depend on speed or distance or gender or social status or even if you happen to be injured or doubting your desire or ability to run ultras. Aaron was part of that and I wish we could have spent some hours together on the trail in the coming years.

He's left behind a wife and a two year old son. Here is Stephanie's message from this morning: "Aaron lost his 13-month fight with stage 4 kidney cancer at 4:50 this morning. The race is over; he sprinted to the finish line. Tomorrow is our 11-year "dating" anniversary. Aaron stopped letting me celebrate it after we got married, but today, I celebrate and honor him and our 11 years together."

Aaron, I'm glad you sprinted it in and are free of your pain and worry.

If you feel so inclined, Stephanie will still need help with medical expenses and you can donate here. 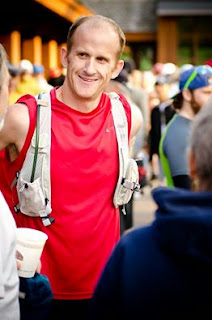 Very nicely articulated Sam. It's been a sad day.....Aaron was a really kind and friendly man who will be missed by everyone who knew him.